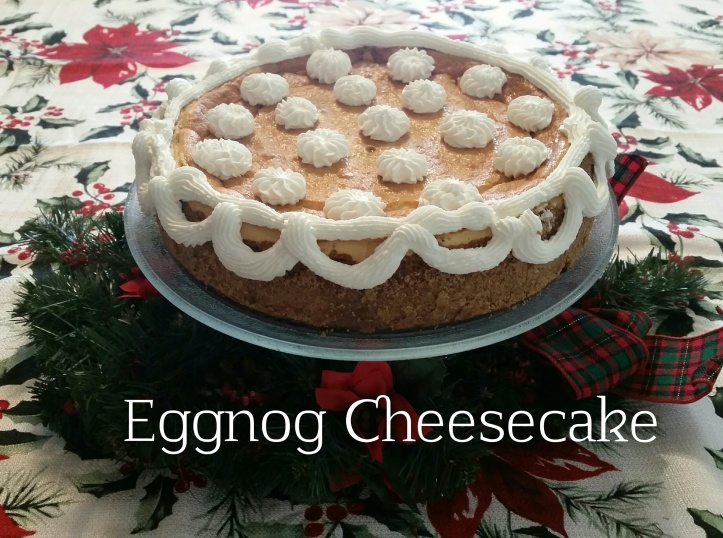 I think I’ve only made real cheesecake a couple times in my life. By real, I mean the kind that takes lots and lots of cream cheese. I found this recipe from Live, Love and Sugar, while scrolling for cheesecake recipes and it incorporated two of my favorites; cream cheese and eggnog. Most times, I take a recipe and tweak it to make it my own, but this one I have to say I followed the directions almost exactly because I had made so few cheesecakes in the past. Oh, and just to start a debate…how many of you think when you said “a couple times”, do you mean two times? My husband and I have had this argument many times and I’ve told him, that to me, a “couple of times” is an indiscriminate small amount. He says it means two. I asked him if, it meant two, why not just say two?

2. Combine the crust ingredients in a small bowl. Press the mixture into the bottom and up the sides of the springform pan.
3. Bake the crust for 10 minutes, then set aside to cool.
4. Cover the outsides of the pan with aluminum foil so that water from the water bath cannot get in. Set prepared pan aside.

5. Reduce oven to 300°F (148°C).
6. In a large mixer bowl, mix the cream cheese, sugar and flour until well combined (Use low speed to keep less air from getting into the batter, which can cause cracks). Scrape down the sides of the bowl.
7. Add the eggnog and nutmeg and mix on low speed until well combined.
8. Add the eggs one at a time, beating slowly and scraping the sides of the bowl after each addition.
9. Pour the cheesecake filling into crust and spread evenly.
10. Place springform pan (covered with aluminum foil) inside another larger pan. Fill the larger pan with enough warm water to go about halfway up the sides of the springform pan. The water should not go above the top edge of the aluminum foil on the springform pan.
11. Bake for 1 hour and 30-40 minutes.
12. Turn off heat and leave cheesecake in oven with door closed for 30 minutes.
13. Crack oven door and leave the cheesecake in the oven for about 30 minutes.
14. Remove cheesecake from oven and chill until firm, 5-6 hours or overnight.
15. To make the whipped cream, add the heavy whipping cream, eggnog and powdered sugar to a large mixer bowl. Whip on high speed until stiff peaks form.
16. Remove the cheesecake from the pan, spread whipped cream over the cake and then pipe the whipped cream onto the cheesecake.
17. Refrigerate the cheesecake until ready to serve. Cheesecake is best for 3-4 days.

My only comments about this recipe were that I didn’t use parchment paper, I just greased the pan and the cake came out fine.

I didn’t spread the whipped cream over the entire cheesecake (wish I had).

The graham cracker crust came out a little thick in between the bottom and the side. I think using it only on the bottom,  would have been sufficient, and, I think I’d leave out the nutmeg.