Mondays with Morie–Episode 40–These Boots…

Way back twenty-five years ago when I started dating my husband, he used to wear a pair of gray cowboy boots with his jeans. He lived on the second floor of his apartment building and often when we got to his building, I would follow him up the stairs. I never told him that I used to watch his rear end as he went up the stairs wearing those cowboy boots and how incredibly sexy I found them. I thought it was such a private thing that I would just secretly enjoy it. That is until a few weeks ago and I had to fess up.

He’s one of those men who doesn’t care at all what he wears and I often have to tell him that I’m not going anywhere with him until he changes his shirt. Not that he is dirty or anything, he’s a very clean person. He’s just not interested in fashion and if his tee shirt has a hole in it, he just says he’s not out to impress anyone. When we got married and he moved into my house, he brought with him clothes that he had obviously not worn for many years and jeans that had gone out of style a decade before. The only reason he probably had any stylish clothes was because of a previous relationship and SHE bought him stylish clothes.  He’s still that way now, if I don’t buy him clothes, he’d probably continue to wear the same old clothes year after year.

But, I digress. The reason the boot thing finally came up is that I’d been harping (sort of like nagging, but not quite) him to clean out his closet and get rid of some of the clothes he never wears. In the back of the closet were the gray cowboy boots. He brought them out and said he knew he could get rid of them because they didn’t fit him anymore. I automatically said, “you can’t get rid of those boots!” When he asked me why, I had to finally admit to him how sexy I thought those boots looked on him and how I used to eyeball him going up the stairs. He asked me what I would do with the boots and I said I didn’t know, but I’d think of something.

Since then he’s mentioned a couple of times about getting a new pair of boots. We celebrated our anniversary last week and me being the romantic person that I am (not!), forgot to even get a card.  When I admitted that in my list-making preparations for vacation I’d forgotten to get him a card, I told him I would buy him a new pair of boots instead. 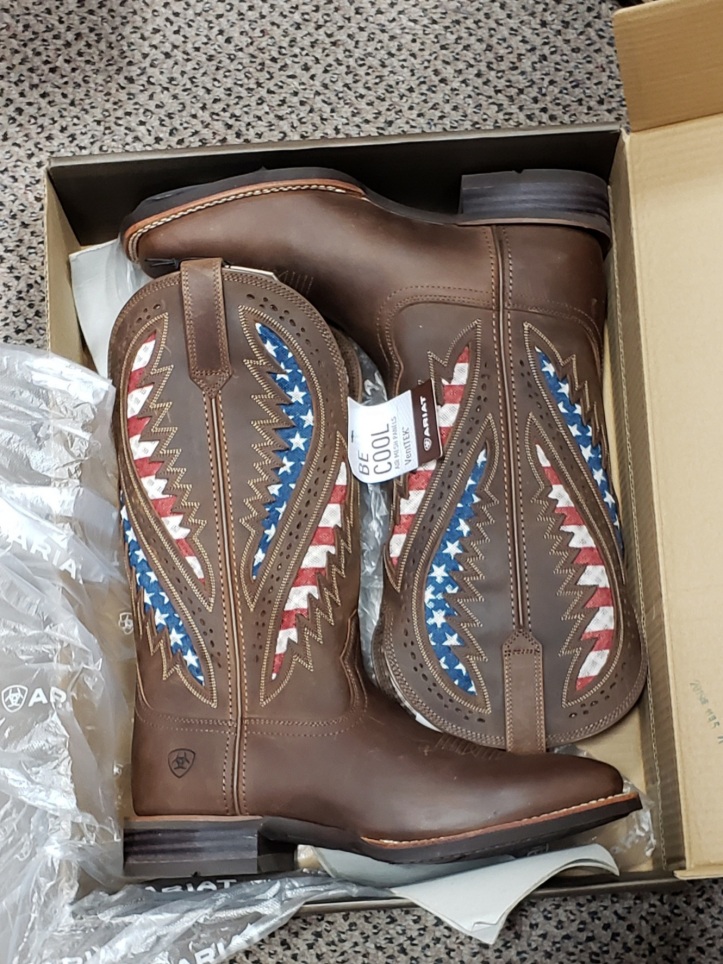 So anyway, yesterday we decided we’d go and buy him new boots. I’d never been in a boot store before and I have to admit I was a little overwhelmed by the number of choices there were. After fitting on several pairs and walking up and down the aisles several times, he chose a pair. I am notoriously cheap and I hate paying full price for anything, so I had to dampen down my desire to say “oh my god!” when I saw the price. But I bought them because they were what he wanted.

We bought the boots and had dinner out. The new boots are now in a box in his bedroom sitting next to the old ones. At least they won’t be lonely in there.