I’ve been on Weight Watchers for about eighteen months. Well, to be honest, I’ve PAID for WW for eighteen months. As with most things, WW meetings were a victim of the pandemic last year except for virtual meetings. I did that for a while until the meeting I enjoyed was canceled. When the limited meetings began last fall, I went to a couple meetings, but only ten people were allowed in the meeting. You had to go to the website to make a reservation for one of seven in-person meetings being held weekly, which made it difficult. I don’t do difficult well.

As with most “lifestyle”changes, (it’s not referred to as a ‘diet’) if you don’t keep it up, you backslide, which is what I’ve done the last five months.  I’m determined to get back on track, but, I have to have my sweets.

I had bought some Fiber One Chocolate Brownie but to be honest, I didn’t really care for them. They tasted good but they were dry and crumbly. Out of the blue today, I hit on an idea of what I could do to make them better–a little chocolate syrup and Cool Whip. Voila!  WW Friendly Death by Chocolate. 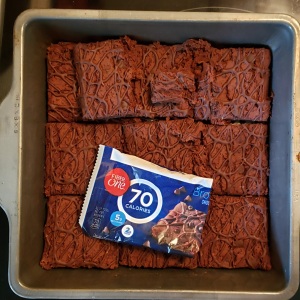 Unwrap 9 bars and place them in the bottom of a 9″ square pan. Drizzle bars with chocolate syrup (and here I just sort of guestimated how much syrup I used). Spread Cool Whip on top and drizzle chocolate syrup on Cool Whip.

These bars were yummy and fulfilling and satisfying and best of all, the point value is less than 4, but let’s go with 4 to make sure. My husband liked them so much he asked for seconds.