I was born and raised in St. Charles, Missouri, historically a town populated by the French and Germans from central and northern Germany. We were mostly Lutherans and Catholics, and I only learned about the Jews from Bible studies. It was not until after high school when I went to work for a lawyer who was Jewish that I learned there were still Jews in the world.

I thought they only existed in biblical times and I don’t recall ever learning of the Holocaust in high school. There wasn’t a synagogue in St. Charles, none that I knew of in St. Louis and I had had no exposure to the Jews or their religion. This probably is why I find the Jewish religion and its traditions to be very fascinating. I especially enjoy reading books written by author Faye Kellerman. She writes a mystery series in which the central characters are LAPD homicide detective Lt. Peter Decker, a converted Jew and his kosher Jewish wife, Rina Lazarus. In her books, the Jewish religion, its culture and celebrations are a central theme in which all of the chaotic life of the homicide detective revolves around.

According to Baruch Schwartz, who wrote the commentary for Leviticus, “Leviticus contains most of the laws which the Jew is commanded to observe on a regular basis…” It is filled with instructions from the Lord to Moses on everything from how offerings should be made to the Lord, to instructions on what could be eaten, when people are clean and unclean and what feasts should be celebrated. 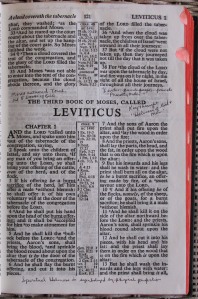 In Chapter 23 the Lord instructs Moses about his special feast days. Schwartz describes these feast days as “festivals coinciding with the major events in the agricultural year; the early grain ripening, the reaping of the first produce, and the final ingathering.”

Verses 5-16 contain the Spring feasts. In 23:4-8 the Lord describes the time for the Passover (pesah) and the Feast of Unleavened Bread (hag ha-matzot): “In the first month, on the fourteenth day of the month, at twilight, there shall be a Passover offering to the Lord, and on the fifteenth day of that month the Lord’s Feast of Unleavened Bread. You shall eat unleavened bread for seven days. On the first day you shall celebrate a sacred occasion: you shall not work at your occupations. Seven days you shall make offerings by fire to the Lord. The seventh day shall be a sacred occasion: you shall not work at your occupations.” Tigay writes about the timing of the Jewish calendar in his explanation for Exodus 12:2, when he describes that the Jewish year “will commence with the month of the exodus, and months will be referred to by ordinal numbers rather than names. Since the numbers will mean essentially ‘in the Xth month since we gained freedom,’ every reference to a month will commemorate the redemption.”
The Passover was also called “Pesah”. The Jewish Study Bible’s Glossary gives the following definition of Pesah: (probably “protection”; others “pass over”) the name of the festival commemorating the exodus from Egypt. The first day involves the sacrifice of the lamb, which took place on the eve of the exodus (14 Nisan); the rest of the festival, Hag ha-Matzot or “festival of unleavened bread,” was probably originally a festival marking the beginning of the spring barley harvest. Pesah is the first of the shalosh regalim or “three pilgrim festivals”.

Verse 16-19 describes the Festival of First Fruits. God is specific in telling Moses “you shall bring… two loaves of bread made of two-tenths of a measure of choice flour, baked after leavening…with the bread you shall present…seven yearling lambs without blemish, one bull of the herd, and two rams…you shall also offer one he-goat as a sin offering and two yearling lambs as a sacrifice.” Schwartz’s notes for these verses reflect that the two leavened loaves were for thanks for the new grain harvest. The yearling lambs offered as a well-being offering.

Verses 23-38 contain the Fall Feasts. Verses 24-25: “Speak to the Israelite people thus: In the seventh month, on the first day of the month, you shall observe complete rest, a sacred occasion commemorated with loud blasts. You shall not work at your occupations; and you shall bring an offering by fire to the Lord.” Schwartz’s notes for these verses state that the beginning of the seventh month marks the beginning of the agricultural year and opens the season of holy days culminated two weeks later in the Ingathering pilgrimage. According to hebrew4christians.com this described celebration was also known as The Feast of Trumpets.
Verse 26: “Mark the tenth day of this month as the Day of Atonement. It shall be a sacred occasion for you: you shall practice self-denial, and you shall bring an offering by fire to the Lord; you shall do no work throughout that day. For it is a Day of Atonement, on which expiation is made on your behalf before the Lord your God….on the ninth day of the month at evening, from evening to evening, you shall observe this your Sabbath.” Hebrew4christians.com describes the Day of Atonement as Yom Kippur. According to jewishvirtuallibrary.org, Yom Kippur is the most important of the Jewish holidays. It goes on to further describe the requirements of the day: “no work can be performed on that day… you are supposed to refrain from eating and drinking (even water)… It is a complete, 25-hour fast beginning before sunset on the evening before Yom Kippur and ending after nightfall on the day of Yom Kippur…additional restrictions that are less well-known: washing and bathing, anointing one’s body (with cosmetics, deodorants, etc.), wearing leather and engaging in sexual relations.”

Verses 34-39 “On the fifteenth day of this seventh month there shall be the Feast of Booths” (Sukkot, the Hebrew word for booths) “to the Lord, (to last) seven days…You shall live in booths seven days; all citizen in Israel shall live in booths, in order that future generations may know that I made the Israelite people live in booths when I brought them out of the land of Egypt.” Schwartz gives a description of the Feast of Booths as a pilgrimage. The Hebrew word for Booths is “sukkot” or huts, makeshift temporary shelters made while laboring in the field or vineyard for several days at a time. The autumn pilgrimage is so named because its long duration necessitates the erection of such shelters to accommodate the many pilgrims during their stay in the Temple city.