You know what they say, “breaking up is hard to do”. Yes, that’s true, especially to someone who routinely keeps something until it is totally broken. So when my trusted Dazey can opener I’ve had for probably forty years (I think it was a wedding present back in 1972) began not to work correctly any longer, I knew it was time.

I know I tried a number of years ago to breakup with this trusted friend, only to find that it’s replacement had a bottom edge that stuck out which prohibited the opening of large cans. (How can you make chili if you can’t get those big cans of beans open?) It didn’t take long before that new replacement changed places with the old in the Salvation Army bin and go back to my old faithful. But now, I knew it was time, so for Christmas, I received a new Hamilton Beach can opener. What a difference 40 years makes!

My old faithful had a plug I could plug into any outlet, every which way.

I didn’t have to worry about which way I was plugging the cord in, it went in any which way. Saved probably several minutes over the last, who knows how many years! After all, why do they make those plugs that can only go in one way, oh yeah, safety reasons.

And way back then, if you got instructions to go with that new can opener, you didn’t have to figure out what language you wanted to read the instructions in. 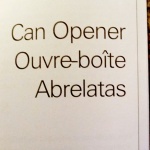 Now, of course, I can choose between English, French (?) and Spanish. Sometimes I read the Spanish manuals just to figure out if any of my three years of high school Spanish have stuck with me. “Como utilizarlo: Asegurese de que la palanca de activacion se encurentre en las posicion UP (arriba) y Unlocked (destrabado).” I understand it says something about activation in the up position…Guess I’d better stick with the English version.

My old trusty can opener cut the lid out of the can. Yes, you had to be careful not to cut your fingers on the sharp edges of the lid when you removed it from the magnet but, blood is the same color as tomato sauce (I know, gross!) So now the new version cuts the entire top off the can, eliminating sharp edges of the can lid. Hmmm. Must be another one of those safety issues.

My old faithful had a cord that was at least two foot long, allowing me to pull the can opener to the edge of the counter to open those large cans. My new one’s cord is only 12″ long. Guess I’ll have to figure out how to get those large cans open. Maybe instead of holding the can as it instructs you, I’ll have to hold the can opener up instead. Another advance I’m sure.

So out with the old and in with the new. After all, it is the start of a new year. New year, new can opener. What’s the chance this one will last forty years? I wouldn’t bet on it. 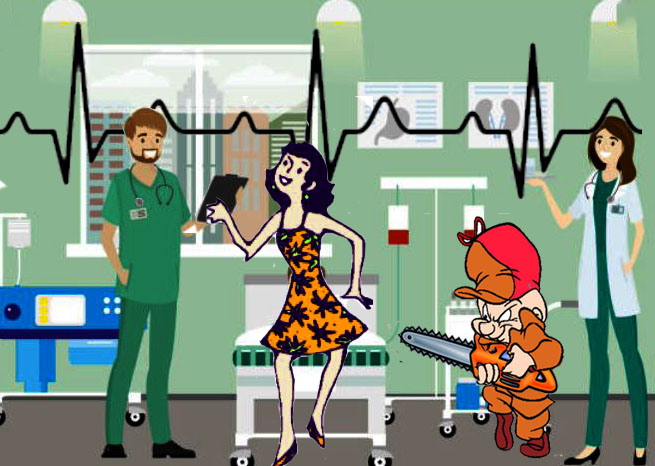