Instead of going somewhere on this Monday, since my husband had just returned from a weekend hunting trip, we decided to just kick back and relax before my cardiac ablation scheduled for tomorrow. And to be more exact, it is a Radiofrequency Ablation. Now that’s a mouthful. And something nine months ago I didn’t even know existed. My life changed drastically last March when I was diagnosed with Atrial Fibrillation; something I’d only heard about in television commercials for some type of medication. 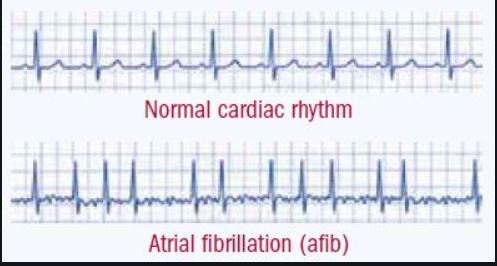 My journey these last nine months has not been uneventful. I was diagnosed in March when I went to Urgent Care for a sinus infection. The PA who treated me said I had an erratic heartbeat and sent me to the hospital. When I walked into the Emergency Department and told them I’d been sent from Urgent Care, the nurse responded with “oh, you’re the one in Afib”. “Ooohhh, so that’s what this is,” I thought. It was later added that I was in “Afib with RVR” (Atrial Fibrillation with Rapid Ventricular Response.) What that means in laymen’s terms is that I had an irregular heart rhythm and a rapid heart rate. The average heart rate is between 60-80 beats per minute but a normal heart rate is considered between 60-100. My heart rate that day was just outside of normal at 105 beats per minute. They treated me with intravenous medication in an attempt to restore my heart to its normal rhythm and an injection of an anticoagulant (in case of blood clotting) in my abdomen which resulted in a golf ball-sized bruise.  These medications weren’t successful in returning my heart to a normal rhythm.  I was kept overnight and monitored and released the next afternoon with instructions to follow up with a cardiologist.

What causes this irregular heartbeat? The website heart.org describes it as:

Special cells in your heart create electrical signals that travel along pathways to the chambers of your heart. These signals make the heart’s upper and lower chambers beat in the proper sequence. Abnormal cells may create disorganized electrical signals that cause irregular or rapid heartbeats called arrhythmias. When this happens, your heart may not pump blood effectively and you may feel faint, short of breath and weak. You may also feel your heart pounding.

The main danger for someone with untreated Atrial Fibrillation is the possibility of blood clots. Since the rhythm is disturbed the heart isn’t pumping blood normally. Blood could pool in the heart causing a clot to form, potentially breaking loose, traveling to your brain and causing a stroke. People with untreated Atrial Fibrillation are five times more like to suffer a stroke than people who do not have Afib along with potential damage to the heart muscle. Afib is also a progressive disease. The longer you have it, most often, the worse it gets. And they say that Afib begets Afib; the more it happens, the more it happens.

Fast forward to May. In an attempt to stop my Afib, I underwent a procedure called “Cardioversion”. It’s basically just like when someone’s heart stops beating and a defibrillator is used to shock the heart except it is done under general anesthesia and the person is alive. The electrical shock normally jolts the heart back into regular “sinus” rhythm. It worked. My heart was back in regular rhythm…for four days. Another cardioversion was performed at the end of May and that one was also successful…for five days. One of the other gifts I received from these treatments was pulsatile tinnitus. In other words, I can hear my heartbeat in my right ear. This is a double-edged sword. Because I can hear my heart beating, I know what the rate and rhythm is, but since I can hear it and know, it can cause anxiety.

Later in June, as sometimes is the case, my heart rhythm spontaneously returned to normal. The problem I then encountered was that the heart rate medication I was taking in an attempt to keep my heart rate slower, caused my heart rate to become uncomfortably low; often in the middle to lower 40s beats per minute. Because my heart was beating so slowly, my body wasn’t getting enough oxygen and I felt like a fish out of water, gasping for breath.

Throughout June and July, I continued to experience tachycardia (fast heart rate), skipped beats, palpitations, and bradycardia (slow heart rate). One morning while I was sitting at the car dealership waiting for my car, my chest felt very tight and I felt as though I couldn’t breathe. I checked my heart rate and it was 42! I decided then I was going to cut down on the heart rate medication and decided to start taking only half of the prescribed dose. It made such a difference. I no longer felt like I was gasping for breath half the time, although I still had palpitations and skipped beats. By the end of July, I decided to discontinue taking the heart rate medication altogether. We went on vacation for a week and I marveled at well I felt.

At my August doctor appointment (I was now seeing an Electrophysiologist, a doctor who specializes in heart rhythms) while I was sitting in the parking lot, I suddenly felt as though someone had punched me in the chest. Immediately my heart began to race and I knew I was back in Afib. Luckily within a few days, my heart rate returned to normal. The bad news though was I had to begin taking the heart rate medication again (along with the heart rhythm medication, blood pressure medication, and blood thinner) but at a lower dose. Also by this time, I was on my third heart rhythm medication (Flecainide). The first rhythm medication prescribed (cardizem) caused an allergic reaction and the second one (amiodarone) didn’t keep my heart in “sinus” rhythm. (“Sinus” rhythm has nothing to do with your nasal sinuses. The “sinus node” is the heart’s natural pacemaker).

The first week of October my heart went back into Afib. I contacted my doctor who gave me instructions on how I could possibly treat it myself at home. I followed his instructions for several days, calling him each morning to report my progress (or in my case, lack of progress) and he instructed me to come to his office that Friday. However, I ended up going to the Emergency Department that Friday morning after getting an alarming reading on my handheld ECG monitor (ST Elevation) that my son, who is a paramedic, told me indicated a possible heart attack.

In the Emergency Department I was again treated with intravenous medications; however, they were not successful in returning my heart rate to normal. I was given the option of leaving the hospital and returning the following Monday for another cardioversion or begin a new heart rhythm medication (Tikosyn). The kicker on this new medication was the FDA requires it to be started under a three-day constant cardiac monitoring because it can cause a potentially fatal heart rhythm. Yea me.

The good news was that after my third dose of this medication (about 36 hours after I was admitted) my heart rate returned to normal.

Unfortunately, ten days later I went into my worst (and scariest) Afib episode with my heart rate reaching 160 beats per minute, feeling as though I couldn’t breathe and dissolving me into a complete state of panic.

This episode ended with me again being kept overnight in the hospital for observation. When the doctor saw me the next day he said he thought I should consider the ablation, something I had rejected when it was first brought up in July. At the time I not only thought “no”, I thought “oh hell no!”  I decided now I would opt for the ablation. I was told by the doctor there was about a four-week waiting list for this procedure and as long as it didn’t interfere with my husband’s annual deer hunting, I was good with waiting. I certainly didn’t anticipate the four-week wait turning into a ten-week anxiety-ridden wait while I continued to experience episodes of tachycardia and Afib.

Radiofrequency ablation is a type of catheter ablation and is a procedure that uses radiofrequency energy (similar to microwave heat) to destroy a small areas of heart tissue that are causing rapid and irregular heartbeats. Destroying this tissue helps restore the heart’s regular rhythm. It is performed under general anesthesia by the doctor inserting long thin tubes (catheters) into your veins (in my case they will be inserted through the veins in the groin–again, yea me!) that travel up to the heart and “ablade” (or burn) the areas in the heart that either cause the irregular rhythm or accept the irregular signal. It is a commonly accepted procedure now to treat Afib, A Flutter (which I’ve also been diagnosed with), and some other irregular heart rhythms. It is a lengthy procedure that takes between 4-8 hours to perform depending on the extent of areas that need to be ablated. There are basically two different types of catheter ablation; radiofrequency (burning) and cryothermal (freezing). Catheter ablation destroys the abnormal tissue without damaging the rest of the heart.

So if you are reading this on Tuesday, January 7, I’m either in the cardiac cath lab fast asleep or flat on my back for four hours after the procedure. I’m scared; I’m not going to lie. I’ve never been sedated for more than about an hour and a half and never had any procedures done on my heart. So send me your good thoughts and prayers and I’ll let you know on my next “Mondays with Morie” how things went.

One caveat…I consider Carpediemdona.com and specifically, Mondays with Morie, to be a teaching/learning experience that I derive no monetary value from thus my use of some copyright images I believe falls under “fair use” doctrine.