About fifteen years ago, a pine tree we had in the backyard fell on the house during an ice storm. I happened to be alone in bed that night and the tree hit the roof right above my bedroom window. I remember not having any idea what had happened and I ran screaming out of my bedroom. Even though this tree did not fall as a result of a thunderstorm, ever since then, I’ve been afraid of storms that happen at night. I can’t sleep once I hear thunder and in pursuit of sleep, I’ve gone so far as making a pallet on the floor near the bed (as though the bed would save me if the tree would fall.)

The offending tree that has kept me awake at night is a 60′ tall cottonwood tree in the upper corner of our backyard. It is a massive tree and has three branches, one of which hangs toward our house. 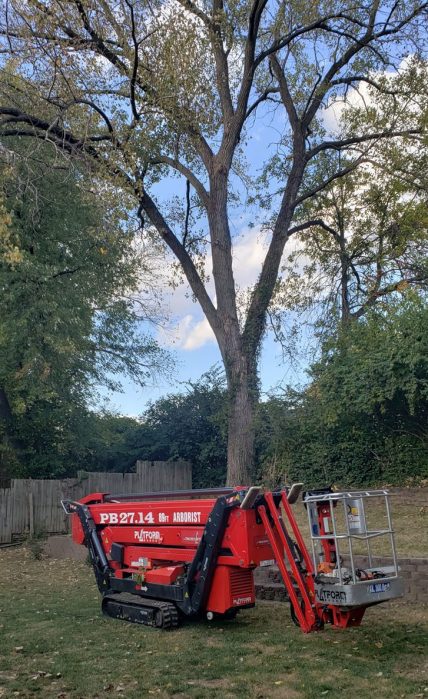 I’ve said before how much I hate cottonwood. At the height of cottonwood season, it looks like it has snowed and if that isn’t bad enough when the nasty cottonwood gets wet, it sticks to everything. So combined with the Sweet Gum tree we have in the front yard with its little hated, barbed balls, we have some of the worst trees around.

I’ve wanted to have this tree taken down for a lot of years. Several years ago, I had gotten a bid of $8,000 to remove the tree. It was much to expensive for me. Recently, my neighbor was having a tree trimming company come and give him a bid for some work, so I told him to send the guy my way when he was done. The man walked into the yard, looked at the tree and said “that’s a $20,000 tree.” That was lots more than the bid I’d gotten several years back and much more than I could afford. I decided that since I couldn’t afford to have the whole tree taken down I’d settle for removing the most offending (at least in my world) branch that hangs over the house removed, along with another really ugly tree we had in the yard. This tree had lost a large limb in a storm about five years ago and since that time it has become progressively scraggly.

These guys made the work look so easy.  The Great Hunter wasn’t home when the work was done. It’s a good thing too because he probably would have sweet-talked his way up in the bucket and have a whack at one of the branches. He’s wanted to take the tall branchless tree down for years but his son and I both voted him down.

Turns out my tree phobia was valid. When the trimmer dropped a piece of the limb that was closer to the trunk, it hit the ground with a thud and shook the ground and I felt it in the house. (If you think about what that thud sounds and feels like, then you’ll understand the terror I felt when awakened from a dead sleep to the pine tree hitting the house.)

Now, I can rest a little easier. It probably doesn’t really make much difference but I can pretend it does. The last thing the tree guy said was that I needed to think about taking the rest of the tree down and I could probably get the owner (who happened to be the guy’s father) to come down to around $12,000. Not gonna happen.