Whew. I can’t believe it’s that time again. I’ve barely gotten over the trauma of the last book club! I was hoping I’d signed up for July, nope, its April. You’re probably thinking, what’s the rush, you have over two months? That would be true if not for the fact that if I want to get a book club discussion kit from the library, I’ll need to decide what I want before the March meeting. Still a long time though? Yes, but….Part of that is just me. I need to have a leg up on things and I really want to know that I enjoyed a book before I recommend it for fifteen other women to read.

The other problem is the availability of discussion kits from the library.  I had no idea what a discussion kit was when I joined the book club. Our library system provides a limited number of titles in a discussion kit that includes ten books and a discussion guide. These kits are available to be checked out for six weeks at a time which is usually enough time to obtain the kit prior to one monthly meeting and then return it after the next meeting. This is really a nice thing even though there aren’t enough books to go around our rather large club, but the early readers usually pass their book on to someone else. The bigger stumbling block is finding what books are available in discussion kits. I mentioned that the library has a limited number of titles available. Currently, they have 485 titles in discussion kits, but at any given time, probably only about 100 (maybe less) are available. Some might be checked out or on reserve and others are kept for special procurement for retirement homes and such. The only way to find out what books are available in the discussion kits is by going through all 485 titles to see what’s available and what might be of interest. Rather tedious I know, because I’ve one it twice! 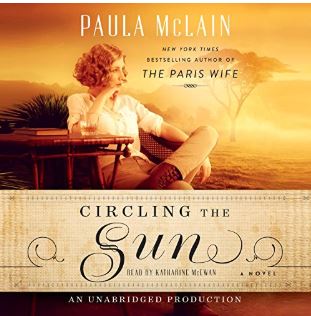 The first possibility for my choice is Paula McLain’s Circling the Sun. Circling the Sun tells a fictionalized account of the biography of Beryl Clutterback Markham, the first female aviator to fly across the Atlantic from east to west. Born in 1902, Beryl lived the majority of her life in Kenya where her father had immigrated to when Beryl was just a young child. Abandoned by her mother at age five, Beryl’s first accomplishment, other than assimilating into the native culture, was to become the first female certified horse trainer in Kenya at the age of 18. When Beryl was seventeen, due to drought, Beryl’s father lost his horse-breeding farm and moved out of Africa leaving Beryl with the choice of either leaving with him or marrying a man quite a bit her senior. She chose to marry a man she didn’t love, with dire consequences.

The story follows her life through the mountains, savannahs and rivers of colonial Kenya; through relationships and embarrassments, heartbreak and accomplishments. You’ll feel as though you were riding along beside her.

A few of my other choices: Judy Blume’s In the Unlikely Event; Killers of the Flower Moon, The Osage Murders and the Birth of the FBI by David Grann, and A Reliable Wife by Robert Goolrick. I was able to buy an entire discussion kit of this last book for $10 so, if all else fails for my other choices, I’ll have this one to fall back on. The reviews on this book run from very good to very bad and apparently a lot of sex. It might not be a good choice for our over 50 group.